Hit enter to search or ESC to close
News

The 1st OaSIS workshop was held on the 22nd of June 2018 in the premises of Scotland Europe in Brussels, organized by EURADA. During the workshop OaSIS project introduced to the audience as a new project aiming to optimize regional development agencies’ segmentation & innovation support for SMEs. All partners of the project consortium, as well as Isoline Roger-Dalbert and Janos Schmied as representatives of the funding institution (The European Commission) were present: Cracow University of Technology, European Association of Regional Development Agencies and Linknovate.

During the workshop, the project’s progress since its beginning December 2018 was presented, and feedback on the next steps was gathered from the audience, particularly of the attending policy makers, regional development agencies and other experts.

After introductory words of EURADA’s Director Esteban Pelayo, Janos Schmied from The European Commission’s DG Growth kicked off the workshop with his keynote to set the scene. Other experts presenting on the topic were Carolina Arriagada Peters from Cities & Collaboration, who spoke about how segmentation can be used for attracting FDI (Foreign Direct Investment), and Dr. Vincent Duchêne from Idea Consult, who presented his research about segmentation of innovation services in Wallonia. Here, it was interesting to learn that according to an UNCTAD survey presented by Carolina, only 40% of business support programs use segmentation. Likewise fascinating to hear was Vincent’s study “Marché public de services d’évaluation de l’impact des aides publiques sur la valorisation des résultats de la recherche” was showing correlations between different innovation support measures highlighting that particularly successful SMEs received vouchers, which means that vouchers might be used as a markers when trying to target high growth SMEs. 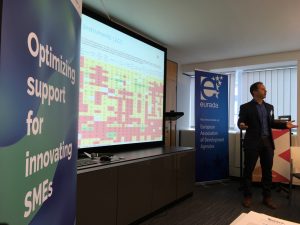 Channeling the focus more to the OaSIS project with every session of the workshop, the three project partners presented the OaSIS project and launched the extension of the open call for regional development agencies’ participation in OaSIS. The overall project aim is analyzing existing approaches of segmenting innovating SMEs and the evaluation of the regional innovation support measures’ efficiency. Big Data analyses play a main role in this, because they will help to uncover patterns and correlations amongst SMEs and success metrics. This allows developing optimized innovation support schemes, tools, and instruments to achieve enterprises with, for instance, the highest level of competition. The possibility to have free access to historic SME and innovation support instrument data, enables OaSIS as a H2020 research project to guarantee anonymized personalized analysis of funding instruments like grants for many SME segments and to generate aggregate European benchmarks. Another outcome of OaSIS is being able to recommend and evaluate which SME innovation support measures work best, least, or which seem promising in other, but similar European environments. Therefore, regional development and innovation agencies in Europe are invited to apply until July 13 online to join the OaSIS project.

In a nutshell, the applicants can choose to participate in four different ways: 1) Third Party Level to share all data on SME segmentation and innovation support for the OaSIS project’s objectives and for the ultimate enhancement of the participant’s own innovation support instruments, SME segmentation methodologies, and impact assessment. Integration as official H2020 project’s third party with a dedicated budget. 2) High Level to share all or some data on SME segmentation and innovation support. Benefit from OaSIS’ results and participate in expert interviews and transnational benchmark. Some of these participants may be nominated as role model. 3) Standard Level to participate in expert interviews and transnational benchmarking with peers on top of benefiting from OaSIS results. 4) Basic Level to benefit from OaSIS’ results. Test software and receive support to use OaSIS methodology and software.

The following session was dedicated to already selected Third Parties of the OaSIS project, sharing their experience. Prior to Hüseyin Özgür Ünsal from East Marmara Development Agency (Turkey) explaining reasons and obstacles for participating in the OasIS project as a Third Party, Carlos Gomez Ascaso, representing Instituto Aragonés de Fomento (Spain), gave his testimonial about data sharing as a Third Party in the OaSIS project.

The last workshop session was the most interactive one, during which the workshop participants have been divided into 3 groups and worked on the expert questionnaire draft to address SME segmentation and innovation support benchmarking. After this exercise the project consortium has combined end-users’ feedbacks and developed the final version of questionnaire that will be used for individual interviews with experts from those regional development agencies participating in the OaSIS project.

To sum it up, the OaSIS team is extremely grateful for all the comments and recommendations received particularly during the last session from the audience, but also during the whole workshop by all participants and speakers. Please find more impressions of the workshop via the OaSIS twitter account @innovationOaSIS and the link to the workshop agenda HERE.